skip to main | skip to sidebar

Among the truths which faith teaches us, there are several which all ought to know and to believe explicitly, viz., the existence of one God; the Mystery of the Holy Trinity; the Mystery of the Redemption of mankind by the Incarnation and death of Jesus Christ, and the future state of reward and punishment.
There are things which every Catholic is also bound to know, by the express command either of God or of the Church. These things are:

It is a mortal sin for a Christian to be ignorant of these things, if it be through his own wilflness or neglect. 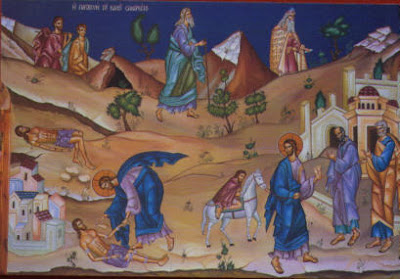 The honour which children are commanded to pay to their parents should be the spontaneous offering of sincere and dutiful love. This is nothing more than their due, since for love of us, they shrink from no labor, no exertion, no danger. Their highest pleasure it is to feel that they are loved by their children, the dearest objects of their affection. Joseph, when he enjoyed in Egypt the highest station and the most ample power after the king himself, received with honour his father, who had come into Egypt. Solomon rose to meet his mother as she approached; and having paid her respect, placed her on a royal throne on his right hand.

We also owe to our parents other duties of respect, such as to supplicate God in their behalf, that they may lead prosperous and happy lives, beloved and esteemed by all who know them, and most pleasing in the sight of God and of the Saints in heaven.

We also honour them by submission to their wishes and inclinations. My son, says Solomon, hear the instruction of thy father, and forsake not the law of thy mother; that grace may be added to thy head, and a chain of gold to thy neck. Of the same kind are the exhortations of St. Paul. Children, he says, obey your parents in the Lord, for this is just; and also, children, obey your parents in all things, for this is well-pleasing to the Lord. (This doctrine) is confirmed by the example of the holiest men. Isaac, when bound for sacrifice by his father, meekly and uncomplainingly obeyed; and the Rechabites, not to depart from the counsel of their father, always abstained from wine.

We also honour our parents by the imitation of their good example; for, to seek to resemble closely anyone is the highest mark of esteem towards him. We also honour them when we not only ask, but follow their advice.

Again we honour our parents when we relieve their necessities, supplying them with necessary food and clothing according to these words of Christ, who, when reproving the impiety of the Pharisees, said: Why do you also transgress the commandments of God because of your traditions? For God said: "Honour thy father and thy mother," and "He that shall curse father or mother let him die the death." But you say: "Whosoever shall say to his father or mother, The gift whatsoever proceedeth from me, shall profit thee." And he shall not honour his father or his mother; and you have made void the commandment of God for your tradition.

But if at all times it is our duty to honour our parents, this duty becomes still more imperative when they are visited by severe illness. We should then see to it that they do not neglect confession and the other Sacraments which every Christian should receive at the approach of death. We should also see that pious and religious persons visit them frequently to strengthen their weakness, assist them by their counsel, and animate them to the hope of immortality, that having risen above the concerns of this world, they may fix their thoughts entirely on God. Thus blessed with the sublime virtues of faith, hope and charity, and fortified by the helps of religion, they will not only look at death without fear, since it is necessary, but will even welcome it, as it hastens their entrance into eternity.

Finally, we honour our parents, even after their death, by attending their funerals, procuring for them suitable obsequies and burial, having due suffrages and anniversary Masses offered for them, and faithfully executing their last wills.

Almighty God, giver of life and love, bless N. and N. Grant them wisdom and devotion in the ordering of their common life, that each may be to the other a strength in need, a counselor in perplexity, a comfort in sorrow, and a companion in joy. And so knit their wills together in your will and their spirits in your Spirit, that they may live together in love and peace all the days of their life; through Jesus Christ our Lord. Amen.

Having seen the declaration of 30th June 1968, with which my predecessor of beloved memory, Bishop Luigi Morstabilini, strongly deplored that in the locality of Fontanelle di Montichiari, a devotion had been fostered and he went so far as to exhort all the faithful not to support either with publications or with pilgrimages the spreading of these devotions. They are founded on an interpretation of events which has not been objectively checked nor responsibly evaluated, therefore they are not approved.

Having taken note of all that I stated in the declaration of the 15th October 1984 in which I made public that the so called apparitions of the Madonna "Mystical Rose" at Montichiari "do not present reasons for credibility," therefore the associated devotion "is not approved and may not be practised nor fostered" and that "whoever fosters it, by spreading publications or organising pilgrimages .... upsets the believers' faith causing them to act against the guidelines of the Church."

What has been affirmed by me and by my predecessor.

This is a meaningful article on the topic at Zenit.
發佈者： Edward 於 下午10:52 1 則留言: